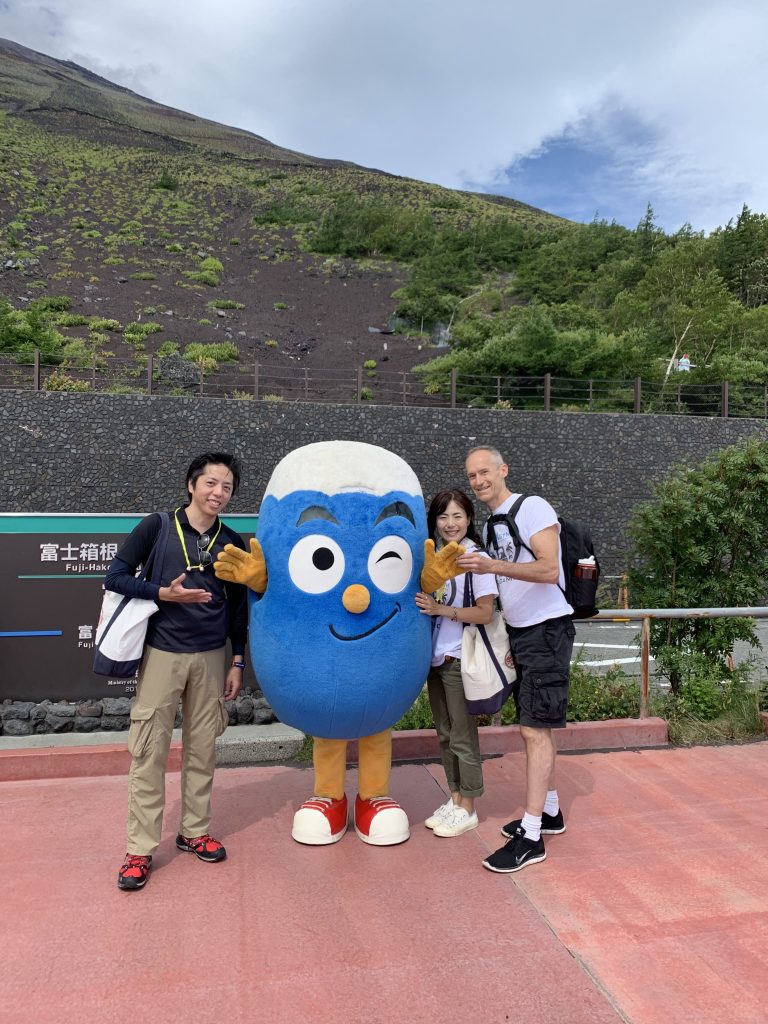 Our First Overnight Event at LFBX

Climbing Mt. Fuji is something I have wanted to do for many years, so I was very excited to have made the commitment to finally make it happen.  Our first Official LFBX GYM “CLIMBING MT. FUJI” EVENT was a success and was filled with so many new and refreshing experiences that I am very excited to share.

We informed everyone at LFBX Gym in early July about this “Climbing Mt. Fuji” Event which may have been too late for many of them.   Some clients were very clear that climbing Mt. Fuji was not something they were even remotely interested in doing.   One client, Peter Von Gomm, said that he had done it twice and that was enough. Another client, Daisuke, said that he has climbed it four times on company trips!!  For some clients, their schedule didn’t permit.  We went with the Thursday 8.29.2019 departure and the Friday 8.30 return, as Thursday would be less crowded than Friday. The climbers would be Taisei Fukaya, Hitomi and I together on a very exciting adventure.

I have always been a sort of a wing it kind of guy, when it comes to travel and getaways, so it was great to go with two people who approach these things a bit more intelligently.  Between Hitomi and Taisei, we decided on Sunshine Tours to take the Prince Trail, as it was known to be less crowded than the Yoshida Trail and a bit more challenging and we all love challenges.

So it was all set!  Taisei mentioned that he had all of the necessary mountain climbing gear, but since Hitomi and I didn’t, the two of us decided to rent all of our gear from head to toe, including the pack, boots and trekking poles for about ¥5,000, ($50) which was a great deal.  We were getting very excited as the day approached.

The night before the trip came and we were preparing clothes, water and food for the trip.  At 3,776 meters (12,389 feet), it can get very cold, so we wanted to make sure that at least we were warm, so we brought some extra warm clothing just in case.  She and I presently have different food preferences, so she stocked up on her favorite dried fruits such as medjool dates and her go-to sundried figs from Seiijo Ishii gourmet supermarket. 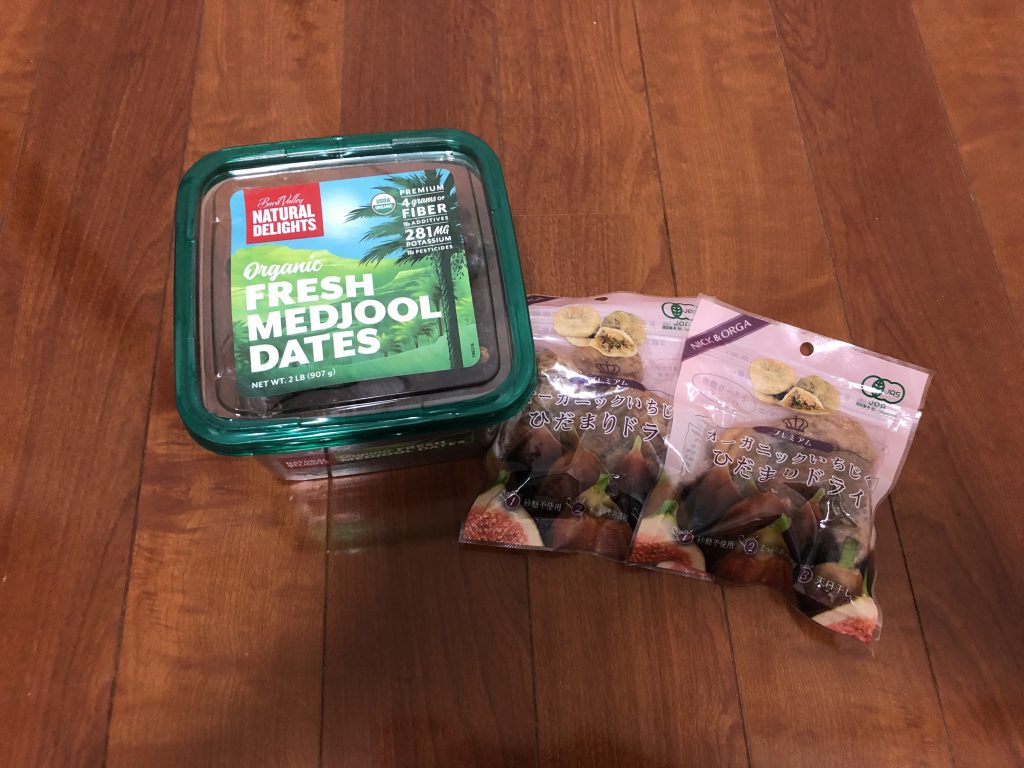 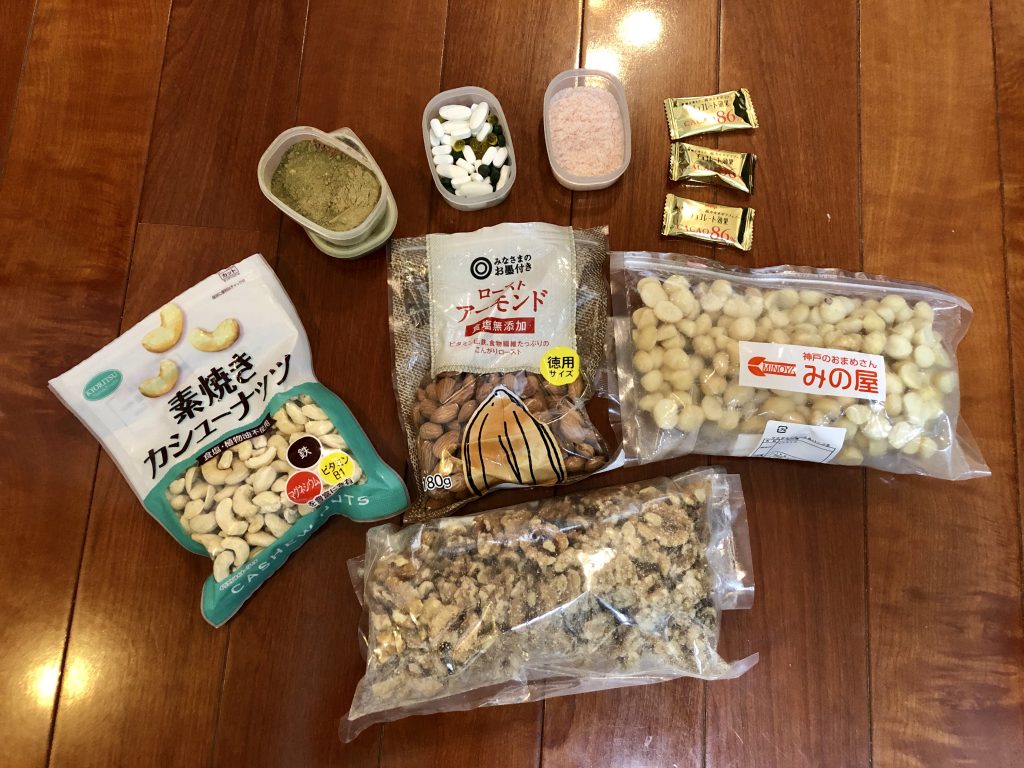 I am transitioning from a LCHF diet into a Ketogenic diet now, so I brought nuts and a concoction I whipped up of Navitas Maca Powder, Sunfood Hemp Protein and High Orac Greens Powder in two containers and pink Himalayan salt, magnesium and potassium tablets in order to make sure my electrolytes stayed balanced.   Since my diet is high fat, I brought raw macadamia nuts, roasted almonds, walnuts & cashew nuts.  I threw in a few pieces of 86% cacao chocolates just to be a rebel:-)

Morning met us with a 4:20 am reminder from our alarm clock to do our final prep.  We caught a 5:45 am train out of Sugamo Station and met our fearless climbing partner, Taisei, near Tokyo Station around 6:20 am.  There were about 100 people, all dressed up in climbing gear waiting to board their respective busses.  We got on our bus and we were on our way.

Everyone on the bus seemed full of energy and gusto as we made our way toward beloved Fuji. 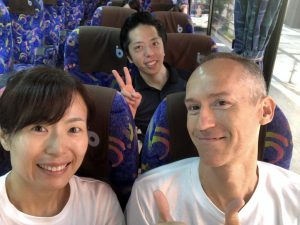 As we were approaching Kanagawa Prefecture, many people on the bus were sleeping, so it was very quiet.  I saw Fuji looming in the background, boldly standing, black against a light blue sky with soft, white, silky clouds.  I thought to myself, “Wow, within 12 hours or so, we are going to be on the top of that mountain looking down at beautiful Japan below!”  It was a quiet moment where my head was metaphorically in the clouds.

Here is Beautiful Mt. Fuji from Expasa, Ashigara, which is a rest area about 90 minutes away from Mt. Fuji.  Notice the surreal cloud formations!? It almost looks like there is a nebulous U.F.O. directly above Her. 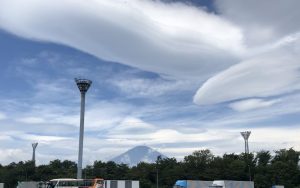 Time seemed to move very slowly on this day, but as it passed, Fuji got bigger and bigger until we realized we were at the base of the mountain.

This was the place where Hitomi and I picked up the climbing gear that we rented.  Taisei chilled in the bus.

The climbing gear looked more of less like this. 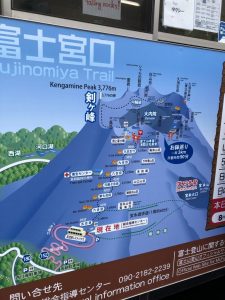 Hitomi and I were very impressed with the sizing of the gear – it fit perfectly!  Suddenly we were transformed into real Mountain Climbers, or at least we looked the part.  It’s amazing what a costume can do to make you really feel the part that you are playing!!  Our excitement was mounting!

The only gear you can see on us in this photo is our packs – lol   We just look like 40-year old university students.

We Arrive at Station 5

We got back on the bus and it took us to the 5th Station of Mt. Fuji.  Climbing Mt. Fuji was at hand! We got out, breathed in the invigorating mountain air and geared up for the climb.

“Due to weather conditions, we need to cancel the tour.  The winds are too strong today to climb safely.  Please put all of your gear back in the bags.  We will be heading back to Tokyo by 2:00 pm.”

This was our expression as we listened to the announcement. 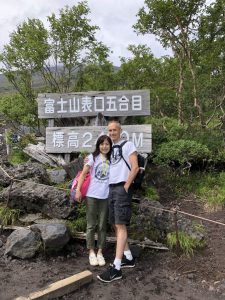 Of course, we were all disappointed!!  And…I was pleasantly surprised by how quickly we all got over it.

I always tell my clients that “Commitment” and “Showing Up” are paramount to success.  The three of us didn’t get to the summit that day, but we committed to the trip and showed up to Station 5,  so we felt a sense of accomplishment from that fact that we were there.

We got some cool photos with Fujippi, the beloved mascot of Mt. Fuji, and enjoyed a little time at the 5th Station before we headed back to our metropolitan home. 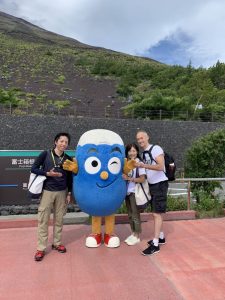 The Trip Back to Shinjuku, Tokyo

Earlier in the day, Taisei and I talked about him having a beer at the top of Mt. Fuji when we summited it.  Of course, that didn’t happen.  So when we got off the bus in Shinjuku, I said, “Let’s get you that beer in Shinjuku before you we go home.” Taisei said, “Oh, that would be really nice.”  In that moment I knew where we could go.  Although I had never been inside, I had passed it many times and got a fuzzy feeling each time I did, so I took them to FOOD HALL BLAST near Shinjuku Station Minami Guchi, for that “Otsukare sama” beer for Taisei.  There are lots of different restaurants within that space and the seating was open, so we found our table and ordered a Tecate beer for Taisei and a glass of Mouton Cadet rose for Hitomi.  I decided to forgo the alcohol and imbibe the spirit of the conversation between us. 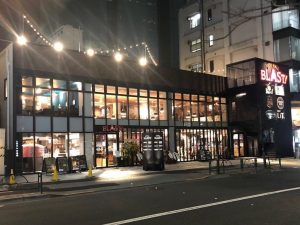 We sat down, did a kanpai and gave thanks for the trip, the experience, our friendship and our safety.  We talked about things such as letting things be, as in the case with the Mt. Fuji trip being canceled that day.  We talked about diet and nutrition and then suddenly Taisei shared something wonderful with us.  He said, “I have something I want to share with you.” Hitomi and I were all ears.   He said that he was offered a chance to write a stage play that would take place on a moving train in Chiba and that the script needed to be completed within one month.

I was so happy to hear this because I know that Taisei’s biggest passion is to be a professional playwright and recently he mentioned that he was down because he didn’t see a way to make it happen.   I exclaimed, “This was the way! This is your ticket, man!  This is a sign saying that YOU CAN DO IT!  You have one month to make it happen, so make it happen!”  He smiled and said that he was happy that I was so enthusiastic about his opportunity.  He added that there were some media people coming to review the play and write about it, which makes the opportunity even more impressive.  It’s Taisei’s chance to really shine!  I was so happy that this opportunity came to him so quickly and needs to be completed in such a short time.  It allows him to commit fully to it and give his best to his passion and dream!   Once I know the details of his play, I’ll be sure to add them to this blog.

The Beauty of Connection

Looking back on that day, I realized that after those 11 hours we spent together, this conversation came out.  It was the icing on the cake – the snow on Mt. Fuji:-)  I realized the beauty of deep, honest, open communication and how it brings us together.  Today was a massive success for all of us.  We committed to do something, we enjoyed the process and journey regardless of the outcome and we connected deeply with each other.

If you have any comments or questions, please leave a comment below.  We would love to hear from you.

Thank you for reading.

Get Your Walk On!

The Joy of Walking: Sugamo to Ginza

Can You Thrive on Just Meat Alone? A Peek into the Carnivore Diet